Skip to content
‘RISE OF EMPIRES: OTTOMAN’
ON MEHMED THE CONQUEROR

We already had an epic series on this particular Turkish sultan two years ago but it wasn’t overly successful and got cancelled after five or six episodes, but now Turkish Netflix is ready to launch new series RISE OF EMPIRES: OTTOMAN which is a mix of docu series and a scripted one. Starting on Netflix from January 24th in 190 countries around the world, this new historical documentary will follow Ottoman Sultan Mehmed II who wages an epic campaign to take the

Byzantine capital of Constantinople and shapes the course of history for centuries. This event is celebrated in Turkey as the highlight of their history,

but in Europe it was a dark moment when the last barriers against their invasion fell announcing many centuries of Ottomans’ bloody rule in Southern Europe, a rule marked by death, rape, slavery, genocide and gruesome tyranny.

sultan Mehmed the Conqueror, while Tuba Büyüküstün appears as famous Serbian princess Despina Mara who, as one of sultan Murad II’s wives, took care of him after his mother died and then helped him later on secure the

next week bringing the epic 15th-century story of Mehmed II, known as Mehmed the Conqueror, which chronicles his astonishing and fabled rise from 13-year-old Child Sultan to toppling Constantinople in 1453 at the age of 21

and becoming the ruler of the Ottoman Empire. The series also features historians including Roger Crowley and Jason Goodwin who give their in-depth analysis.

Labels: DESPINA MARA, MEHMED THE CONQUEROR, NETFLIX, TURKISH
‘THE WITCHER’ EPIC SERIES
MOST ANTICIPATED SERIES OF THE YEAR IS READY TO LAUNCH

The moment is finally upon us, spylings, Netflix is ready to start airing what is without any doubt the most anticipated series of the year, from December 20th! Lavish small screen adaptation of Andrzej Sapkowski’s epic fantasy adventure (the books have been sold to date in more than 30 million copies around the world) THE WITCHER will stream its eight episode opening season ahead of Christmas with the second season already ordered. Hollywood’s leading hunk Henry Cavill toplines the cast as demon hunter in an epic tale of fate and family. Anya Chalotra stars as Yennefer and Freya Allan as Ciri. Other

The Witcher Is An Epic Story
revolving around famed monster hunter, Geralt of Rivia (Henry Cavill) who lives in the world of The Continent where humans, elves, witchers, gnomes, and monsters battle to survive and thrive, where people often prove more dangerous than beasts, and good and evil is not easily identified! But when destiny hurtles him toward a powerful sorceress, and a young princess with a dangerous secret, the three must learn to navigate the increasingly volatile Continent together.
Witcher Geralt of Rivia

A demon hunter played by Henry Cavill who says that Geralt is not an average hero! He’s a tough person who won’t treat everybody perfectly. He’s

very hard on the exterior because that’s what he believes the world is!  He kills monsters who have invaded his world from a parallel dimension. He has a faithful horse called Roach.

Princess Cirrilla, played by Freya Allan, feels like she’s been sheltered from the real world. Hidden behind shrouds of loyalty and castles. She sneaks

out from time to time. She remains loyal but strives to know the world outside of her walls. After losing her entire family and everyone she loves in one night,

Cirilla feels lost. She is thrown into a vicious, upside-down world than she is used to and must push forward to find Geralt. Adventuring from place to place

and finding herself in new landscapes and towns, Cirilla learns a lot about herself. A power that she possesses, but cannot understand. Yet.

Played by Anya Chalotra, Yennefer’s story arc is powerful and full of challenges. Born with a misshapen spine and jaw, she is sold by her father who

resented her for her differences. This not only begins her on her journey but completely changes her life arguably for the better. She will become a powerful sorceress.

Did You Know?
The series is created and executive produced by Lauren Schmidt who also produced Umbrella Academy and Daredevil series. Henry Cavill actively pursued the role of Geralt but was initially turned down before the
show was even written. After Schmidt tested more than 200 actors she realised Henry was the only right choice especially as she kept hearing his
voice in her head while writing Geralt’s lines. Henry considers the role a dream come true and I’m sure you will all agree we wouldn’t want anybody else leading this show!
Posted by DEZMOND at 1:30 PM 6 comments

The Vikings saga will continue on Netflix. The streamer has picked up Vikings: Valhalla, a sequel to the hit series that is heading into its sixth and final season on History. I hear Netflix has ordered 24 episodes of the new series from Vikings creator Michael Hirst and studio MGM Television, which continues the storytelling of the original.

Three streaming services fought for the series Valhalla will have the story which begins 100 years after the original series concludes and dramatizes the adventures of the most famous Vikings who ever lived: Leif Erikson, Freydis, Harald Harada and the Norman King William the Conqueror (also a Viking descendant). These men and women will blaze new paths as they fight for survival in an ever-changing and evolving Europe. This is the explosive next chapter of the Vikings legend. It will bring heart-pounding, unstoppable action rooted in rich characters and dramatic storytelling that shines the light on family, loyalty, and power!

The Elric Saga has been translated into many languages 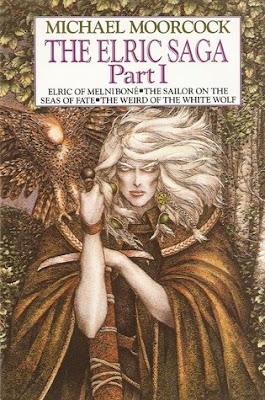 Speaking of epic delights, Deadline reports that New Republic Pictures has acquired rights on Michael Moorcock’s famous THE ELRIC SAGA with the plan to turn it into TV series with Glen Mazzara and Vaun Wilmott attached to pen it. It is a series of 11 complex and layered novels that take place across multiple dimensions of reality and alternative universes. They began with the legendary Elric of Melnibone novel. The saga brings sword and sorcery tales that centre on the title character, a brooding albino warrior who presides over an unruly, decadent island nation. The novels follow Elric on a series of adventures, in which he is betrayed by his cousin, sent into exile and attempts to come to terms with his own humanity.

Your Complete Guide to Pilots and Straight-to-Series orders

Written and executive produced by feature writer Jeb Stuart (Die Hard, The Fugitive), Vikings: Valhalla begins 100 years after the original series concludes and dramatizes the adventures of the most famous Vikings who ever lived: Leif Erikson, Freydis, Harald Harada and the Norman King William the Conqueror (also a Viking descendant). These men and women will blaze new paths as they fight for survival in an ever-changing and evolving Europe. This is the explosive next chapter of the Vikings legend.

When Deadline broke the news in January that History’s flagship drama would be coming to an end after Season 6, we also revealed that Hirst and MGM TV were looking to extend the Vikings franchise with a new series, written and exec produced by Stuart, who had been handpicked by Hirst.

At the time, History was in talks with MGM TV about the offshoot. But interest in the project quickly grew as streamers with deep pockets went after the hot, global-appeal property. By this fall, Vikings: Valhalla was in a bidding situation with three major streaming companies in pursuit. Netflix landed the series in a pricey deal with a massive commitment, by its standards, of 24 episodes. Netflix’s average season size is eight to 10 episodes.

Vikings is accustomed to large orders — it has been producing 20 episodes a season since its fourth season; they have been airing in 10-episode half-seasons.

The mothership Vikings series currently is not available on Netflix; it’s streaming on Hulu and Amazon Prime Video. Netflix is expected to pursue SVOD rights to Vikings to have on the platform alongside sequel Vikings: Valhalla.

“I am beyond excited that we are announcing the continuation of our Vikings saga,” Hirst said. “I know that the millions of our fans across the globe will be thrilled by the belief being shown in our show by MGM and Netflix. Jeb Stuart, a truly wonderful writer, will bring new story-lines and a powerful visceral vision to stories about some of the most famous Vikings known to history.“

Hirst, who also created The Tudors and co-created Camelot, has a first-look deal at MGM. In addition to him and O’Sullivan, much of the Vikings team in all departments will return for the sequel. It will be filmed in Ireland where the original series was shot.

“We are thrilled to be partnering with Michael, Morgan, Jeb and Netflix on the next chapter in the incredible Vikings universe,” said Steve Stark, MGM’s President of Television Production and Development. “Valhalla has been a labor of love for everyone involved and as we look ahead to the continuation of this great saga, we are excited to know that fans the world over will have the opportunity to continue with the series on its new home at Netflix.”

Vikings has been an important show for MGM TV. It marked the first series order for the company as it was rebuilding itself post-bankruptcy. The TV studio has ramped up its portfolio since; it also includes the Emmy-winning The Handmaid’s Tale and Fargo.

When he originally was tapped to spearhead the Vikings followup series, Stuart was working with History sibling A+E Studios as creator, writer and executive producer of animated World War II drama series The Liberator, which initially had been developed for History but ended up at Netflix.

“Vikings: Valhalla promises to be everything that fans love about the franchise: heart-pounding, unstoppable action rooted in rich characters and dramatic storytelling that shines the light on family, loyalty and power,” said Channing Dungey, VP Original Series at Netflix. “We are thrilled to bring the next iteration of the Vikings saga to life with Michael Hirst, Jeb Stuart, Morgan O’Sullivan and MGM Television.”

Created and executive produced by Hirst, who has written every episode, Vikings was a breakout ratings hit when it debuted in 2013 and remains History’s No. 1 scripted series of all time, successfully overcoming a number of cast changes, including the exit of original lead Travis Fimmel, whose character Ragnar Lothbrok’s story arc came to an end in Season 4.

Vikings originally set out to follow the adventures of Ragnar Lothbrok (Fimmel) and tell the sagas of Ragnar’s band of Viking brothers and his family. Because it was based on actual historical figures and events, Vikings had a finite number of stories to tell and had been building toward an end, set by Hirst as the creative mastermind behind the series.