Skip to content
‘THE PERSONAL HISTORY OF DAVID COPPERFIELD’ COMEDY

FROM RAGS TO RICHES AND BACK AGAIN

This one has been criticised for forcefully imposing diversity in the casting for a period set movie and for putting quirky humour which did not exist in the original book by Charles Dickens, but some also praised it for the funny approach to a costume drama. We shall have to judge for ourselves as THE PERSONAL HISTORY OF DAVID COPPERFIELD is currently playing in British cinemas and will head over to USA and Russia in May. The big screen adaptation re-imagines

across the world. Director Armando Iannucci lends his wry, yet heart-filled storytelling style to revisiting Dickens’ iconic hero on his quirky journey from impoverished orphan to burgeoning writer in Victorian England!

What’s The Story About?
From birth to infancy, from adolescence to adulthood, the good-hearted David Copperfield is surrounded by kindness, wickedness, poverty and wealth,

as he meets an array of remarkable characters in Victorian England. As David sets out to be a writer, in his quest for family, friendship, romance and status, the story of his life is the most seductive tale of all.

Who Is In The Colourful Cast?

production design at British Independent Film Awards last year. Although many consider the casting quite controversial, the movie did score a nomination for best casting at British Film Academy Awards for 2020. 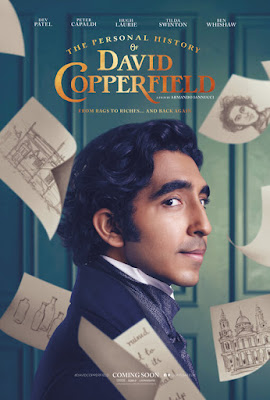 THE PERSONAL HISTORY OF DAVID COPPERFIELD starring  Patel, Hugh Laurie, Tilda DevSwinton, Ben Whishaw, Aneurin Barnard, and based on the famous novel by Charles Dickens. Out next January in UK, the story of this period set movie follows titular character David Copperfield in the 1840s as he navigates a chaotic world to find his elusive place within it. From his unhappy childhood to the discovery of his gift as a storyteller and writer, all the while on a journey full of life, color, and humanity. Check out the trailer below and tell us what you think!